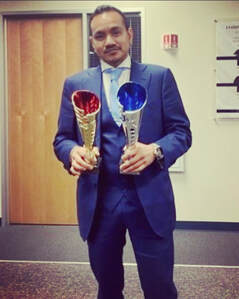 In 2015, he enrolled at L Makeup Institute in Las Vegas, Nevada with the goal to attain a cosmetology license for Visual Graphics SPFX Makeup & Beauty 101 to enhance his professional photography and filming career while specializing in fashion forward beauty as an independent makeup artist where he has also obtained a certificate of completion and license to operate. He admires and finds inspiration from makeup artist such as Miss Fame and Patrick Starr to name a few. He has also works with the top of the line upscale products such as Urban Decay, NARS, Smashbox, Anastasia Beverly Hills, LuxBox, Sigma, etc. for his clients.

In early 2016, he began his freelance career by operating as a private personal consultant as a professional private MUA while offering makeup and wedding photography services in West Hollywood, California and Las Vegas, Nevada.

​Today, he is focused on establishing his private small business career and building his professional business portfolio by providing his freelance services to other local and international small business owners and individual clients across the United States, United Kingdom, and Asia.

​Kaneda Yoshida widely offers his services to all LGBTQ+ identified individuals as well as cisgender straight or LGB-Queer allies. ​

​​In 2010, he has been learning to cook​ authentic homemade Cambodian family recipes taught and passed down by his parents. He has a love for food and admiration for the restaurateur culture and has been cooking with a passion to enjoy savoring other cultural dishes. He has been learning to cook various comfort food during his time of employment with La Colombe Torrefaction, Inc., a French-based coffee roaster company in the heart of Philadelphia owned by Todd Carmichael and Jean Philippe Iberti, while resident in Las Vegas, Nevada in which he was employed with the company as the warehousing and office administration assistant personnel for the West Coast Operations.

During his ten and a half year tenure working in a fast pace environment for a high-end gourmet food and beverage industry, most of his culinary adventures and home cooking inspirations has been from European recipes such as France, Italy, Spain, and Germany while learning additional cultural food recipes from other cultures such as Hawaiian, Thai, Chinese, Korean, Spanish, and Japanese dishes. Most of his self taught homemade culinary practices were inspired by celebrity chefs on the Las Vegas strip and their passion to create and design exceptional quality and fresh culinary food. He find inspiration in cooking through cookbooks, food blogs, and other cooking channels such as Cooking With Dog, Cooking Korean Food With Maangchi, etc. to name a few. Since then he has been pulling, adapting, and creating recipes from food magazines such as Bon Appétit into his own unique way and style of cooking by experimenting and tweaking recipes.

One of his first culinary adventures was attending Vegas UnCork'd 2012 in Las Vegas, Nevada where he was tabling to promote La Colombe Pure Black Iced Coffee next to Chef Francois Payard and Chef Nobu Matsuhisa, which has further inspired him to contemplate a possible culinary career. While resident in Las Vegas, Nevada he has enjoyed fine dining and being a secret food critic where he has dined at L'Atelier, Gordon Ramsay's Steakhouse, Mon Ami Gabi, etc. to name a few.